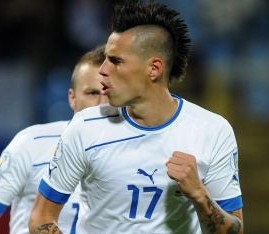 We are a bit late with this article, but we are so happy about it that we decide to write about it, even if we are late! So yes it is true, Slovakia is ready for Euro 2016 which will be played in France the summer of 2016!

We do not know yet against which teams Slovakia will play in the tournament, but the possible opponents can be found and read about in the following article. What we can know for sure is that Slovakia will not play against Hungary and they will not play against Czech Republic, two opponents it is nice that they will not meet, just for the sake of friendship! But, if they are lucky, or maybe unlucky, they might end up facing the same two opponents which they already met in the qualification group, meaning that they have the chance to play against both Spain and Ukraine in the Euro 2016. We are not sure if that would be a positive thing or not, because both those teams are really tough, and Slovakia may have been lucky to be able to beat both Ukraine and Spain in matches during the qualification stage. Maybe Austria would be a better opponent than Ukraine, but in football it is impossible to say and impossible actually to predict the strength of the teams, so by the time we reach France and the Euro 2016 Slovakia might be in such a good curve that they can beat any team. But, on the paper Slovakia might not be among the big favorites to even qualify for the knockout stage following the group stage.